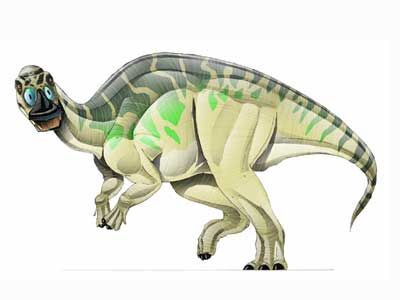 Edmontosaurus was possibly the largest of the duck-billed hadrosaurs. It was a little bigger than a T. rex and was probably a food source for the large meat-eater. It walked on all four legs much of the time, but it could also stand easily on its hind legs, as they were much larger than its front legs. Edmontosaurus had on average over 500 teeth and some had over 1,000! These were all jammed together in what is called a dental battery. This dinosaur could really chew up the tough plants on which it fed.

When first discovered, many researchers thought these dinosaurs would have lived in the water due to the shape of their heads and the fact that one mummified specimen seemed to have webbing on its front feet. Later research has shown, however, that these creatures lived primarily on coastal plains, floodplains and river deltas. Their dental structure also supports a more terrestrial lifestyle, as was perfectly suited for plants that were found in forests near water, and not those that were found in the water. Another interesting Edmontosaurus feature is that the skin seemed to consist, at least partly, of horny plates - good defense against glancing bites and blows from predators.

Retrieved from "https://jurassic-park-institute.fandom.com/wiki/Edmontosaurus?oldid=376"
Community content is available under CC-BY-SA unless otherwise noted.