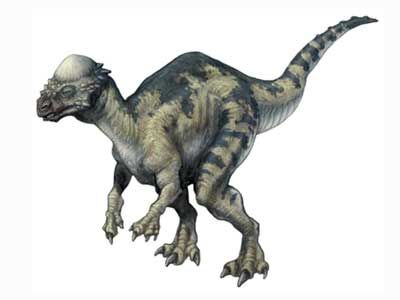 This was a real bonehead. The skull of Pachycephalosaurus was 10 inches thick on top. For years, scientists thought it was used primarily for head-butting contests, sort of like mountain goats do today, but recent studies of the skeletons of related dinosaurs show that its neck might have broken if it tried that.

A skeleton of the Pachycephalosaurus has never been found, so most of what is known about it is only from the skull and its close relatives. There are several strange characteristics, in addition to its thick skull. It lived at the very end of the dinosaur age, when most dinosaurs were fairly advanced, yet it still had five fingers, a primitive characteristic. Also, the shape of its teeth was somewhat primitive, similar to those of the Stegosaurus which had lived over 100 million years earlier. These were clearly plant-eater teeth, but it also had front teeth that could have been used like a meat-eater.

Retrieved from "https://jurassic-park-institute.fandom.com/wiki/Pachycephalosaurus?oldid=553"
Community content is available under CC-BY-SA unless otherwise noted.