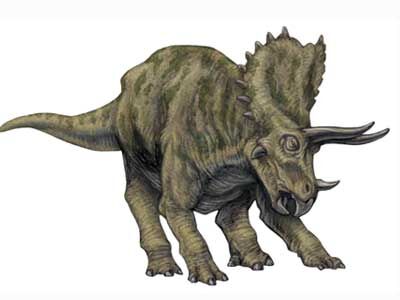 One of the top three on everyone's favorite dinosaur list, Triceratops is a very common dinosaur which lived at the very end of the Age of Dinosaurs. It had a huge frilled head with horns over each eye that could reach over 3 feet long. Triceratops had a third, smaller horn on its nose. These would be fearsome weapons against a predator.

Triceratops was a herd animal; it is believed that large groups roamed North America. Their large, horny beaks and long rows of teeth were well designed for chewing the tough, low growing plants of the Late Cretaceous. It was likely the main predator of these animals was T. rex. A number of skeletons show bite and chew marks that match the teeth of T. rex. Horns and frills seemed to vary among individuals within the species. Some frills were very broad, others narrow. The nasal horn shows the most variance among individual specimens, no two being the same. The material that covered its horns in life would have added significantly to the length of the fossilized bone.

Retrieved from "https://jurassic-park-institute.fandom.com/wiki/Triceratops?oldid=505"
Community content is available under CC-BY-SA unless otherwise noted.