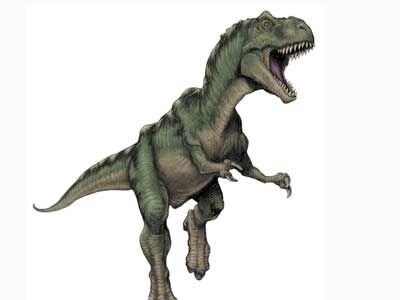 Probably the most famous of all dinosaurs, T. rex was probably the fiercest meat eater that ever lived. At more than 45 feet in length, it was huge and had the most powerful head of any dinosaur. It also had the biggest teeth of any dinosaur - teeth that were not only sharp and cutting edged, but also thick and strong, capable of crushing bones.

After many millions of years of evolution, nature arrived at T. rex, an almost perfect killing machine. It had large feet to help it run quickly through the swampy environment in which it lived. Although it had very short arms, it didn't need its arms to be an effective and efficient killer. It had enormous strength in its jaws; it could bite right through the frill of a Triceratops or into the back of a hadrosaur. In fact, the only thing that a T. rex had to fear was another T. rex. Most of the scars and wounds found on fossil bones of these great creatures seem to come from others of its kind.

T. rex is very well known, with more than 30 individual specimens having been found. Less than half of these had any significant amount of the fossil, but it still gives us a very good picture of these creatures. The most famous of the fossils of this creature is "Sue" which is now on display at the Field Museum in Chicago. Sue is about 42 feet long; her largest tooth is almost 13 inches.

T. rex is a good example of how our thinking about dinosaurs has changed based on how much we have learned. Back in 1915 when the first skeleton was mounted, most people thought it was a slow beast that dragged its tail along the ground. This view was partially because it would have been very expensive to mount it any other way, and scientists weren't sure how it looked in life. Now, scientists are confident that they understand how T. rex and other dinosaurs looked and lived. T. rex probably walked and ran with its back and tail parallel to the ground, its massive legs and hips a fulcrum for its body. It was an active beast, and recent evidence strongly suggests it was warm blooded.

It has recently been debated as to whether T. rex was strictly a hunter or strictly a scavenger. Their is evidence to both sides of this debate and most scientists believe that T. rex was both an effective hunter and an opportunistic scavenger.

Retrieved from "https://jurassic-park-institute.fandom.com/wiki/Tyrannosaurus_rex?oldid=512"
Community content is available under CC-BY-SA unless otherwise noted.